'The Unravelling of Michael Gilchrist' by S C Ashton 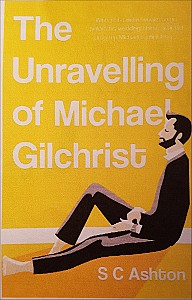 If only Michael had found the courage to tell ophthalmologist, Jo, he hadn’t proposed when she believed he had. But then Jo’s a determined woman, and besides, the truth would have made her unhappy, and making others unhappy is something Michael has tried to avoid for as long as he can remember.

It’s not an approach to life that has brought Michael himself much happiness, earning him to date both an unwanted career and ghosts that haunt his past and present. But when faced with recurring nightmares featuring characters from Star Wars (albeit the original trilogy) and farcical preparations for a wedding he doesn’t want, to someone he isn’t sure he loves, while trying to find a way to rescue his beloved friend, Gwynnie, from indefinite incarceration, Michael begins to unravel.

If his only hope of personal happiness requires making a lot of people (and one determined ghost) very unhappy, what’s he going to do?